Archaeological excavations of the expedition conducted by the Centre of Classical and Oriental Archaeology at the Institute for Oriental and Classical Studies, HSE University, were held in the city of Agrigento, on Sicily. The Second Archaeological School, which was based on that expedition, took place from the 4th to the 25th of September, 2021. 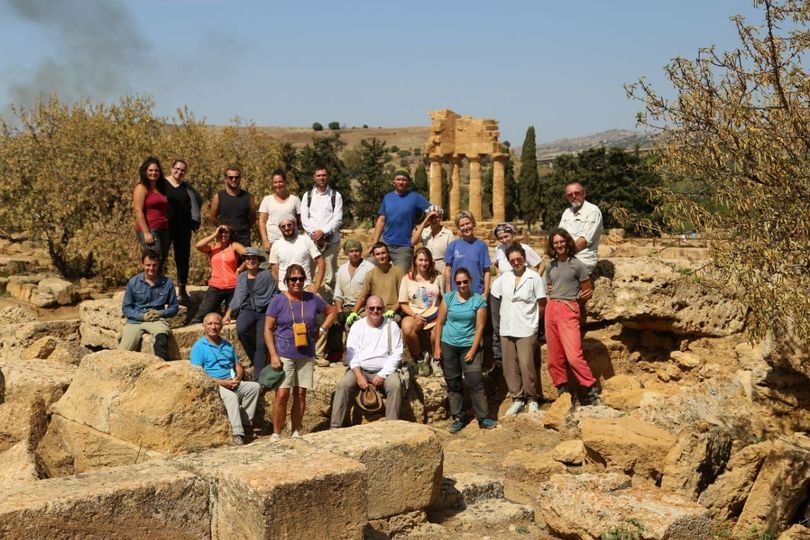 Joint expedition of the HSE University and the University of Bordeaux-Montaigne. In the centre – the Directors of the excavations, Askold Ivantchik and Laurence Cavalier.

The expedition was attended by the staff of the Centre (Askold Ivantchik, Valentina Mordvintseva, Yuriy Svoiskiy), invited experts (Nikolay Sudarev, Alexey Ivanov, Ekaterina Romanenko), as well as ten students and postgraduates of the Institute for Oriental and Classical Studies. Despite the many difficulties associated with epidemiological restrictions (in particular, in order to start working without mandatory quarantine, it was necessary to obtain a special permission from the Italian Ministry of Health), it was possible to carry out a full-fledged excavation, which gave interesting results.

The excavations were undertaken as part of the International archaeological expedition led by Laurence Cavalier (University of Bordeaux-Montaigne, France) and Askold Ivantchik (HSE University, Russia). In addition to these universities, the project partners are the French School of Archaeology in Rome, the University of Wisconsin (USA), and the Agrigento Archaeological Park (Italy). The research was carried out in the western part of one of the outstanding and most famous ancient Greek sites – “Valley of the Temples” (included in the UNESCO World Heritage List), where five Greek temples of the Archaic and Classical times are perfectly preserved. In the western part of the “Valley of the Temples”, there was a sanctuary of chthonic deities. Our expedition explored its first terrace. The French part of the expedition continued the excavation of the “tempietto” (a small temple) in the southwestern part of the terrace, while the Russian part explored two sites in the northern part adjacent to the sacred road. There was a portico here, and research was carried out both in the portico itself and in the buildings adjacent to it from the north, presumably of a cult purpose. In a later period, they were rebuilt and, probably, there were bases of monumental statues constructed in their place. The documentation of archaeological layers was carried out using three-dimensional photogrammetry by Yuriy Svoiskiy, Ekaterina Romanenko, and the students. 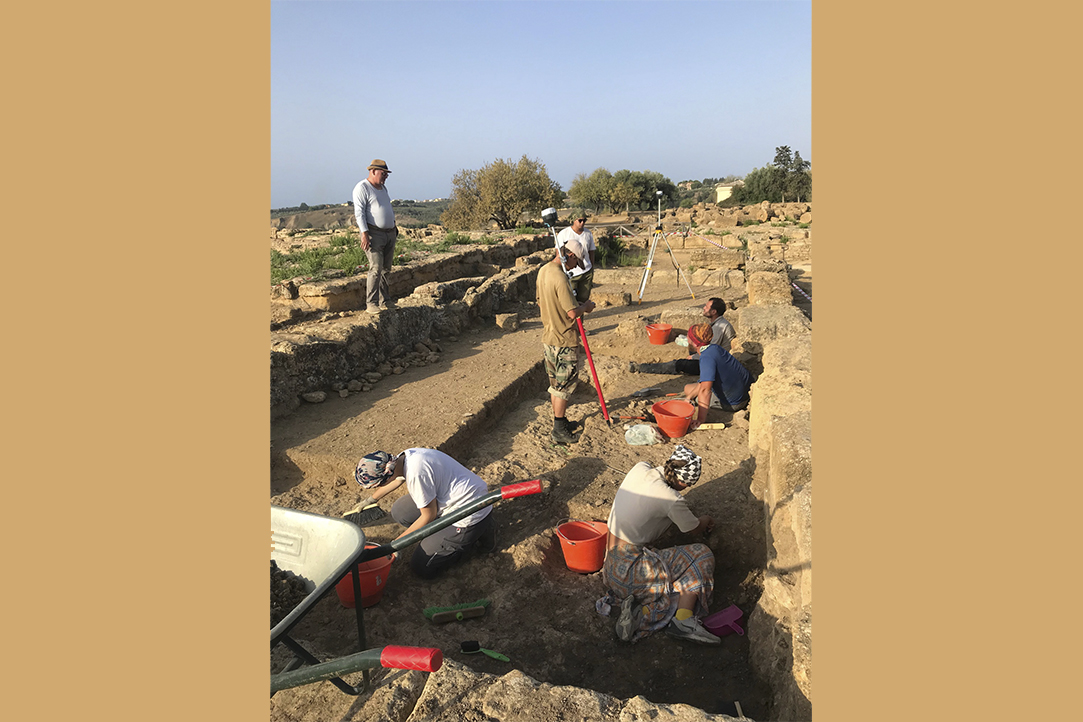 Excavation site of the Russian group.

As a result of the excavations, the chronology of the buildings has been established and their structure has been studied. Among the finds, several votive offerings deserve special attention, containing painted ceramics of the archaic and classical periods, terracotta figurines and bronze phialai. But even more important is the discovery of three lead tablets rolled into scrolls: usually such artifacts contain the texts of incantations. Judging by the context of the find, they belong to the 5th century BC. The tablets should be restored and neatly unfolded. If the presence of inscriptions on them is confirmed, it will become a truly sensational discovery. After the excavations, the unearthed places were swamped up.

Within the archaeological school, before the start of excavations, students prepared referats on the key sites of the Greco-Roman civilization of Sicily. They also participated in listening to a series of lectures prepared by the expedition staff. Askold Ivantchik has delivered the introductory lecture “Akragant and Sicily”, in which he gave a brief outline of the history of ancient Akragant, and also discussed the results of the last season’s excavations. Ekaterina Romanenko presented methods of the documentation using three-dimensional modelling and photogrammetry. Nikolay Sudarev lectured on the ancient Greek sites of the Taman Peninsula, synchronous with the sites of Akragant. Ksenia Mitrokhina presented an essay on the history of modern Sicily. In the lecture “The Barbarian Encirclement of the Asiatic Part of the Bosporan Kingdom”, Aleksey Ivanov gave a description of the Maiotian settlements and burial structures of the Kuban region, emphasizing their similarities and differences with the ancient Greek sites. Valentina Mordvintseva in her lecture “Archaeological Culture: Ethnic vs. Network Model” presented her concept of a network model of archaeological culture. Yuriy Svoyskiy delivered a lecture “The shape and dimensions of the Earth”, in which he spoke about the basics of geodesy and methods of measuring heights and coordinates.

The school program included also excursions to the ancient archaeological sites and museums. In the frame of this program, a tour on the Akragant’s “Valley of the Temples” took place, after which the school participants visited the Akragant archaeological museum. Elizaveta Boyko, a HSE PhD student, gave a lecture on the Temple of Zeus in Akragant, which was based on the materials of her master's work, near the ruins of this building. In addition, an excursion in the modern city of Agrigento was conducted, which included a visit to the Santa Maria dei Greci church, rebuilt from the ancient temple of Athena. The further excursion program included a visit to the Villa Casale (Piazza Armerina) with its unique complex of mosaics, as well as the ancient Morgantina and its museum. Anna Ivanova, a school participant, spoke as a guide to the Roman villa, and Alena Gorskaya talked about the city of Morganthine. The following weekend, a trip to the western part of Sicily took place. We visited the city of Selinunte, a talk about this site was prepared by Elizaveta Boyko. Vyacheslav Strelyaev spoke about the defensive system of this city. Then the island of Motia was visited, which is displaying remains of a Punic colony. The Motia Museum houses a splendid example of Classical art – the ‘Statue of a young man’. Then there were sights of Palermo visited - Palazzo Normanni, which amazed everyone with its golden mosaics of the 12th century, and the Archaeological museum, which contains, in particular, materials from the excavations of Selinunte, including the architectural details of its temples. In the afternoon, we visited the city of Segesta, founded by Aeneas according to the legend, with its unusual Doric temple and theatre with a beautiful view of the Bay of Castellammare. The report on the city was prepared by Vladimir Lysenko.

Excavations in Akragant will continue next year, and the Third archaeological school is also planned. As in previous years, these events will be attended by the students of the Institute for Oriental and Classical Studies, who are specializing in archaeology. 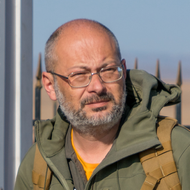