In her paper, presented on April 24, 2019 at the seminar Oriental Cultures (Moderator: Dr. Natalia Chalisova, IOCS HSE), Dr. Natalia Korneeva analysed the structure of the morning ritual of worship at the Ganges river at Assi Ghat in Varanasi. The focus of the paper was on the female students from Pāṇini Kanyā Mahāvidyālaya who recite Vedic mantras as part of their education on performing rituals. 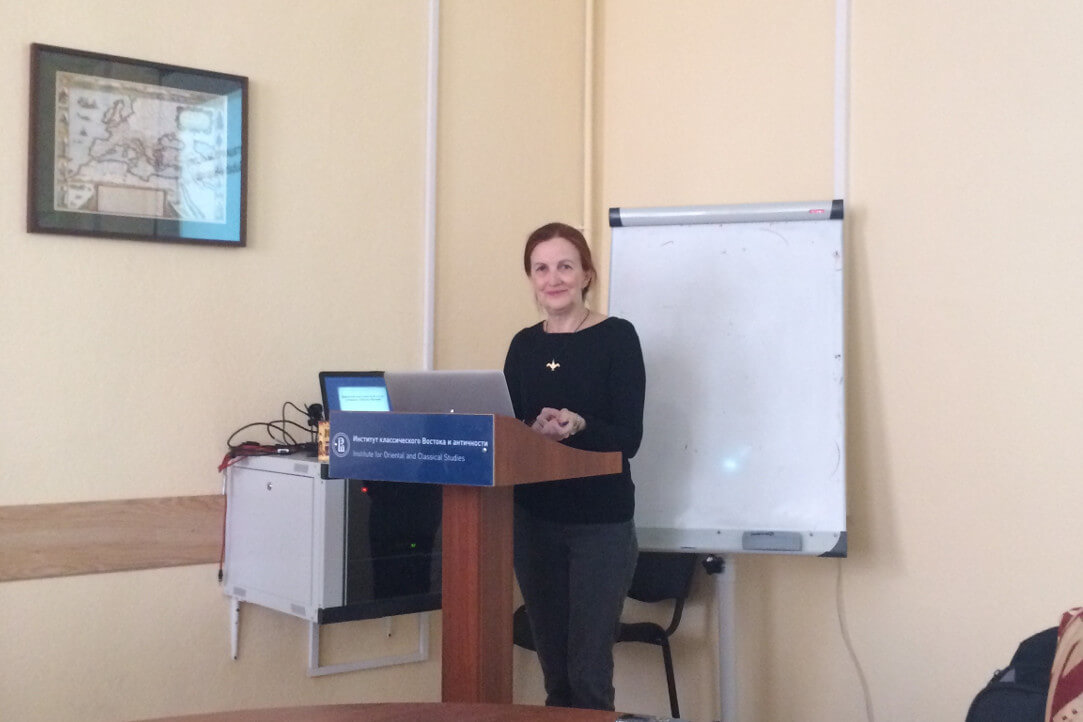 The first part of the paper was focused on the daily colorful morning ritual of Ganges worship at Assi Ghat (Assī-ghāṭ) in Varanasi which is the main segment of an inspiring morning program Subah-e-Banaras (lit. “Morning of Banaras”). The program has been held daily since November 2014. 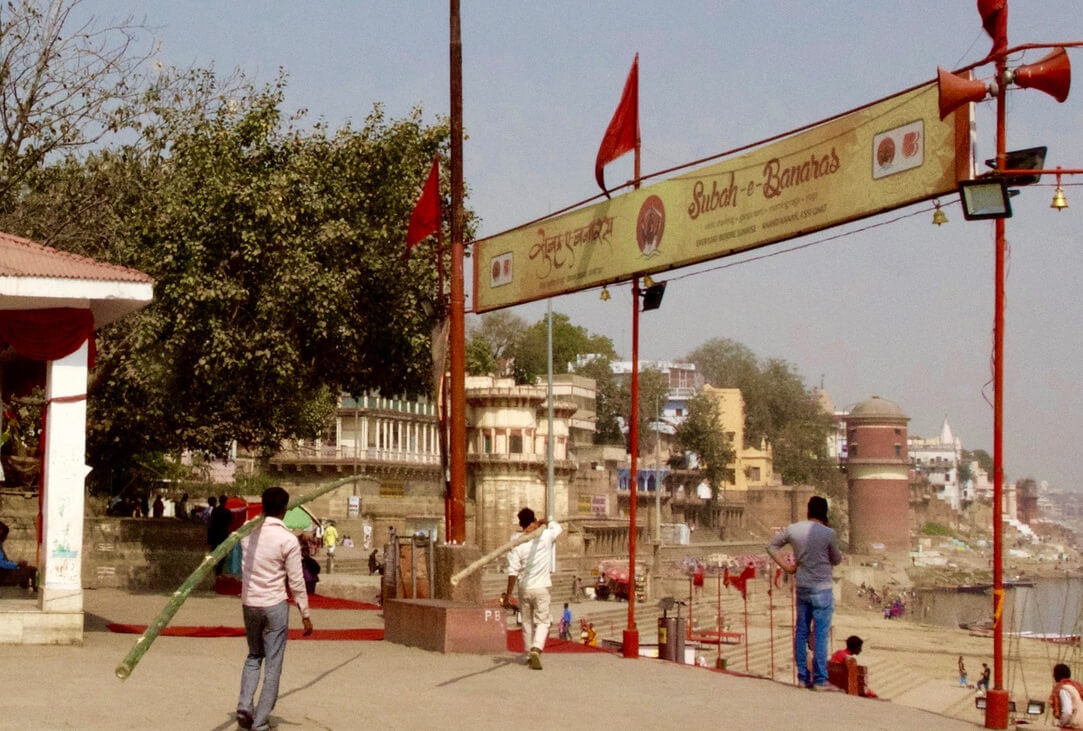 The ritual begins before sunrise each day (at 5:30am in winter and at 5:00am in summer). The ritual starts with the recitation of Vedic mantras by female students from the Pāṇini Kanyā Mahāvidyālaya.

Vedic chanting by girls from the Pāṇini Kanyā Mahāvidyālaya at the begining of Subah-e-Banaras program.

The sound of the conch announces the beginning of the Gaṅgā ārati/aarti which is a ritual worship of the Ganges with fire.

The sound of the conch announces the beginning of the Gaṅgā ārati/aarti.

While the Ganges is offered incense the students light the lamps with a multitude of lights for the Gaṅgā-ārati.

Lighting the lamps for the Gaṅgā-ārati and offering incense.

Simultaneously, their teacher recites mantras in the yajñaśālā which is a special pavilion used for performing the yajña at Assi Ghat. 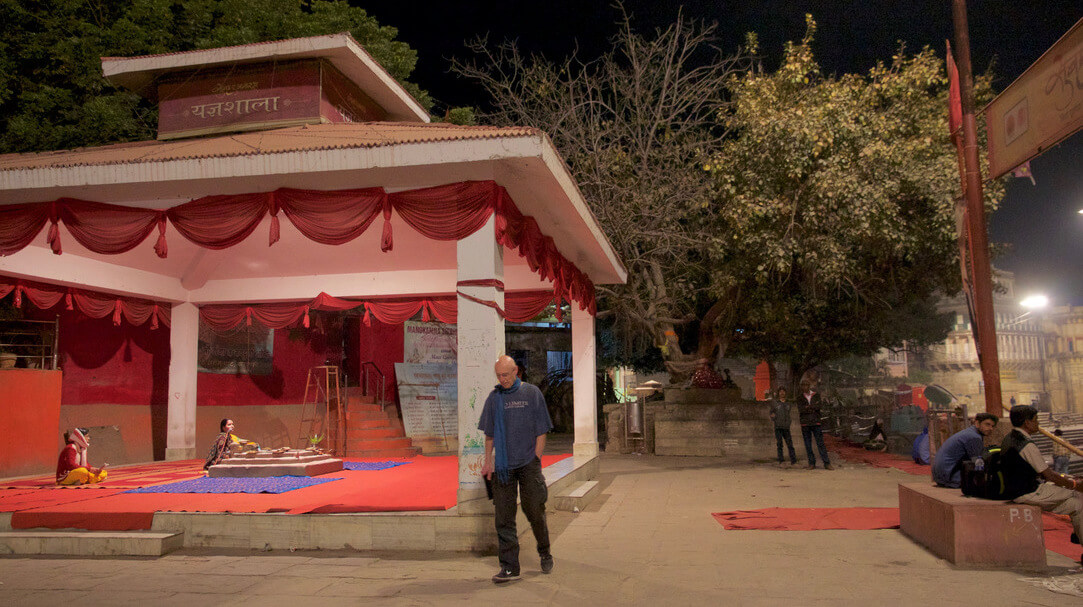 The second is the Gaṅgā-ārati which is performed by young priests on the raised platforms overlooking the Ganges.

The Ganges is worshiped by the fire that is produced in multi-tiered lamps. These are rotated clockwise by the priests. Following this action, a different lamp is used in a similar motion. Then the priests offer water that is contained in a conch shell, then a peacock feather fan. Lastly, they offer a conch shell and a camara (the bushy tail of the yak employed as chowrie). 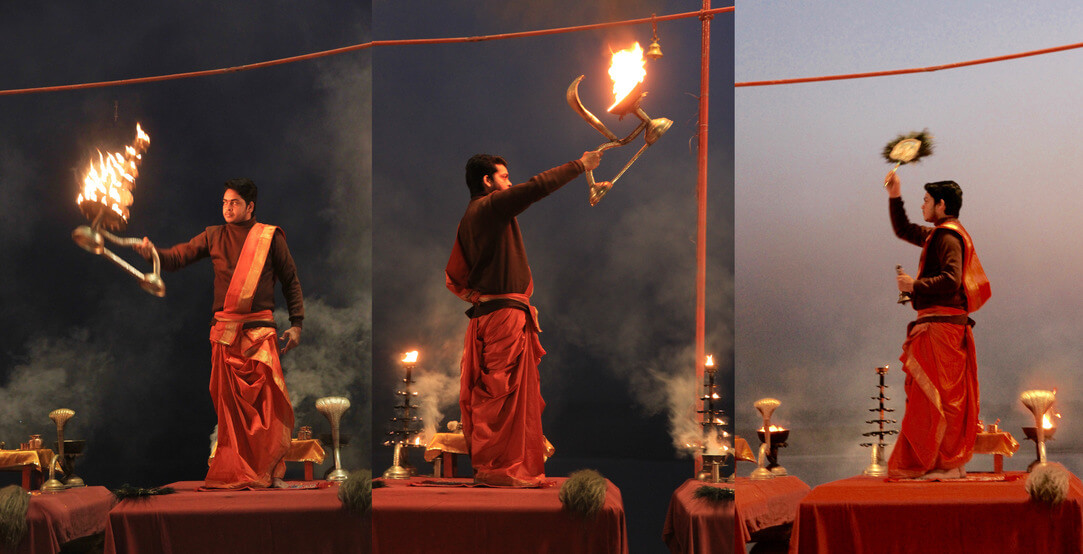 To conclude this part of the ritual, the priests descend to the Ganges, make a water offering before returning to their seats. While this occurs, the Agnihotra in yajñaśālā continues to be performed.

At the conclusion of the Agnihotra, the participants receive a blessing. The female students of the Pāṇini Kanyā Mahāvidyālaya then go down to the Ganges and make water offerings with the mantras. 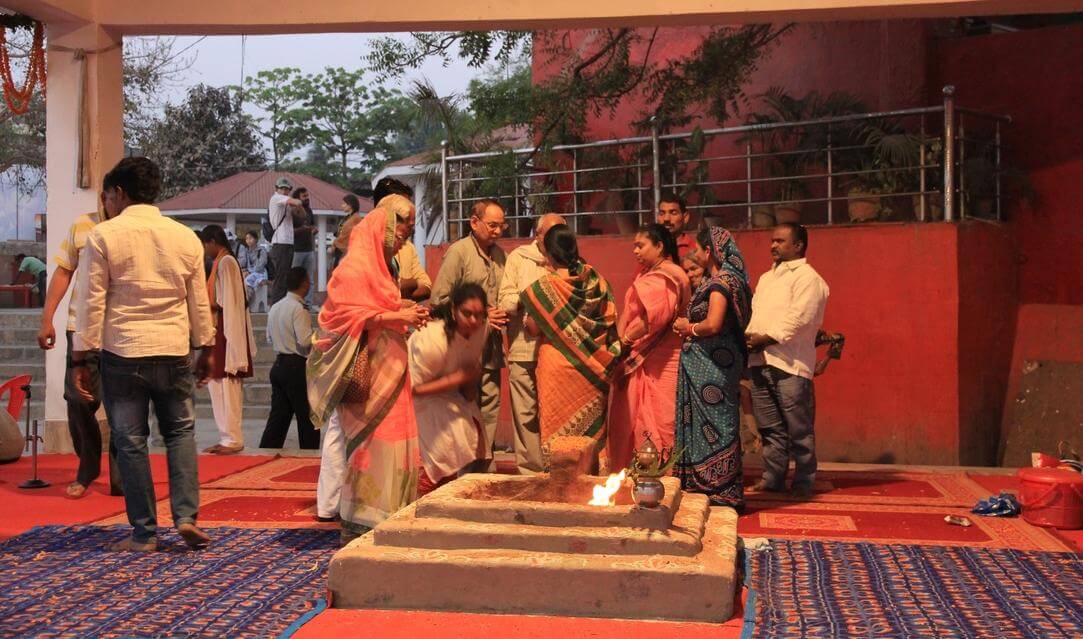 The participants of the Agnihotra receive a blessing.

Once the ritual is finished, all participants—including the audience—praise the Ganges, India, nature, and so forth. All participants receive prasad and blessings from the fire.

The conclusion of morning Ganges worship ritual at Assi Ghat. 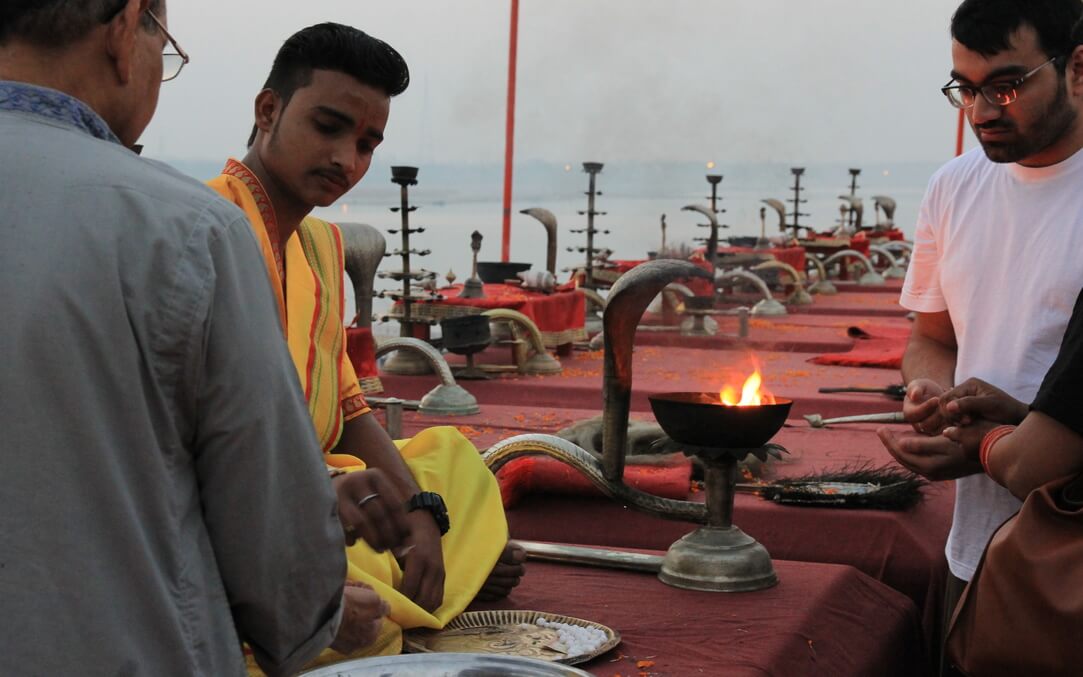 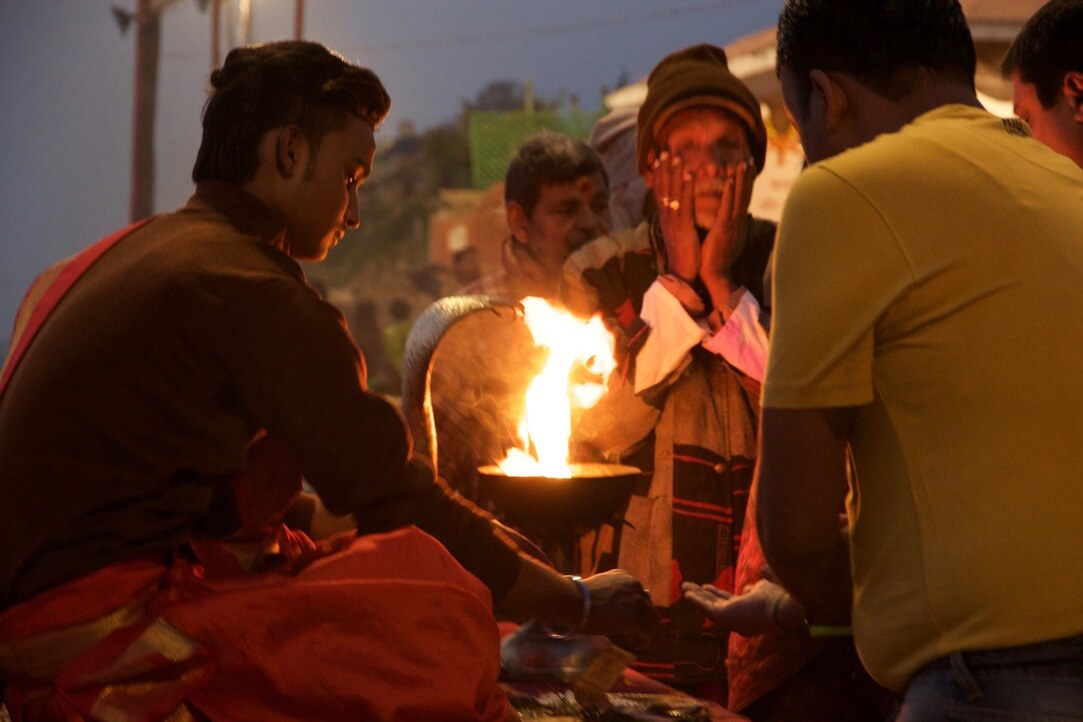 Participants receive prasad and blessings from the fire.

After the ritual concludes there is a concert of Indian classical music followed by a yoga class. Both are included as part of the Subah-e-Banaras every morning. 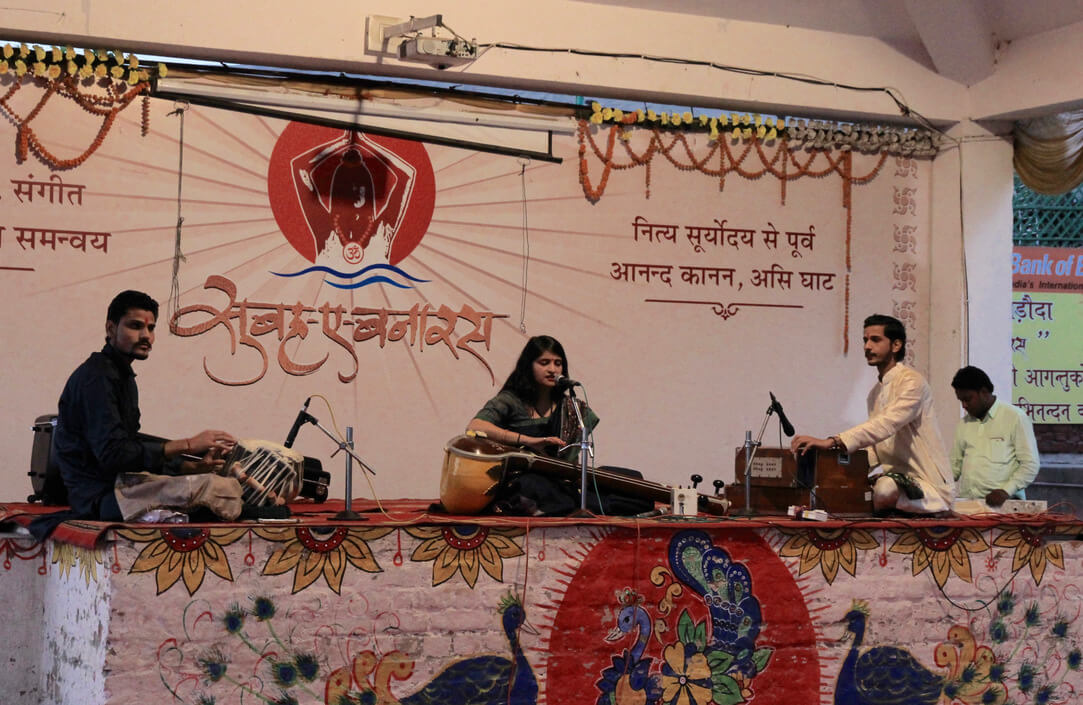 Daily concert of Indian classical music at Assi Ghat as a part of the Subah-e-Banaras program. 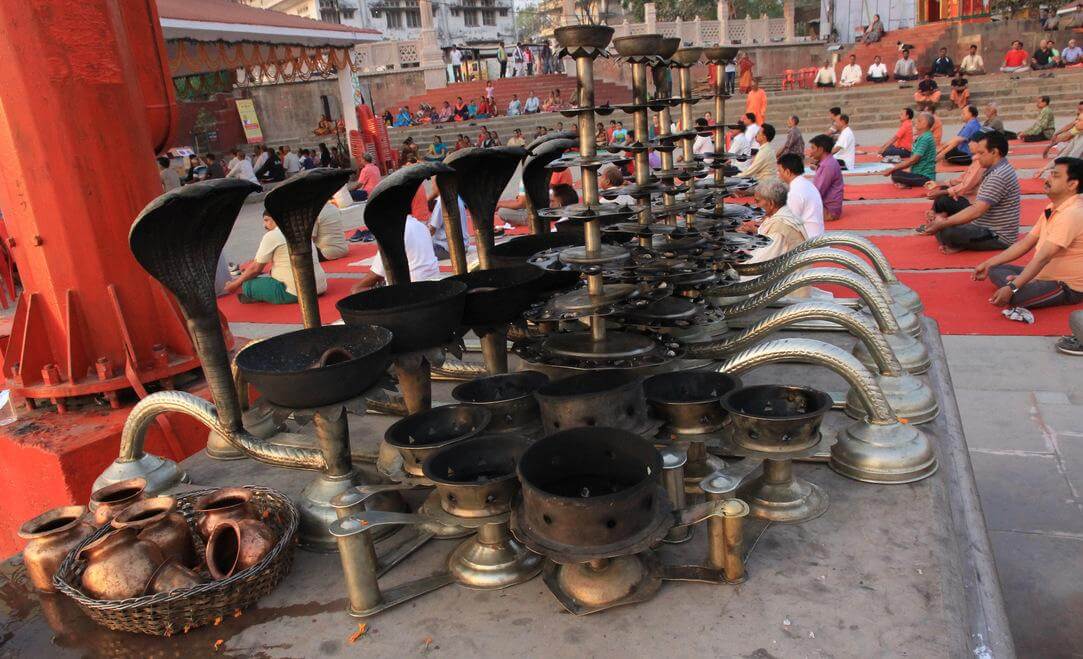 Daily yoga class at Assi Ghat as a part of the Subah-e-Banaras program.

The second part of the paper was devoted to the preparation of the Pāṇini Kanyā Mahāvidyālaya’s students and the traditions of the school.

The Pāṇini Kanyā Mahāvidyālaya is a general degree female college of Pāṇini. It was founded in 1971 by Prajñā Devī who was a disciple of the Pandit Brahmadatta Jijñāsu. 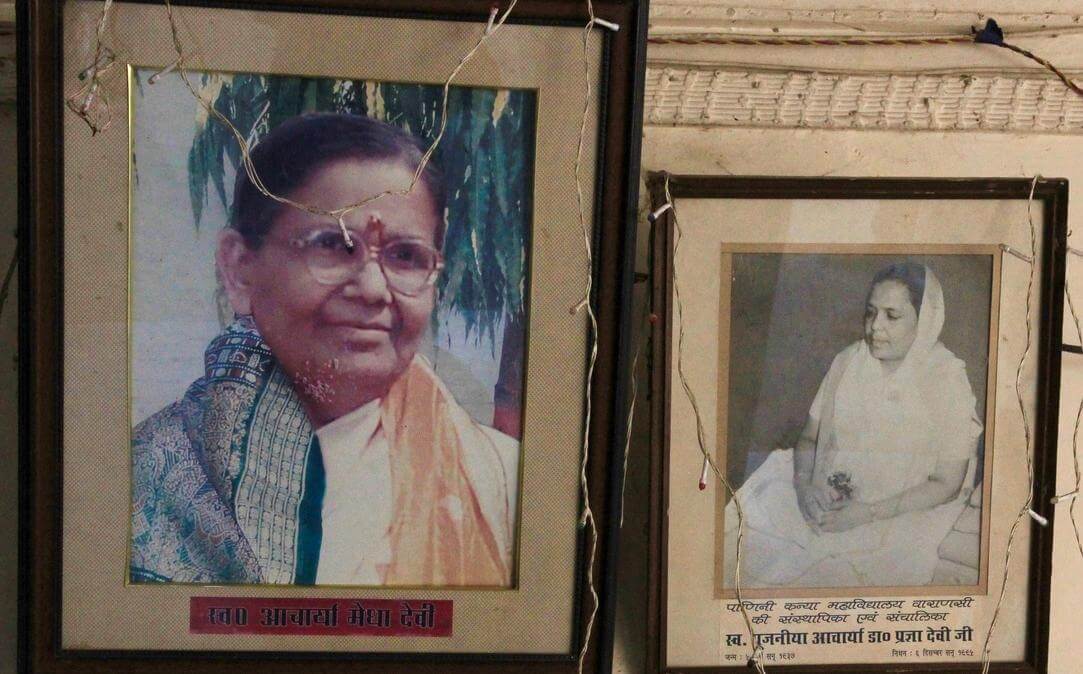 Brahmadatta Jijñāsu (1882–1964) was a famous Sanskrit scholar who was honoured as Rashtriya Pandita by the Government of India. He was the publisher of Pāṇini’s Aṣṭādhyāyī and the Aṣṭādhyāyī Bhāṣya (3 Vols). He also published works by Swami Dayananda Sarasvati. Because of this parampara, Pāṇini’s grammar and Dayananda Sarasvati’s teachings are the basic framework of the Pāṇini Kanyā Mahāvidyālaya. The students undergo the upanayana (initiation) and are invested with the sacred thread (yajñopavīta), as the twice-born. Their names are then changed to Āryā in accordance with the tradition of Arya Samaj.

The school follows the model of the gurukula (lit. “the family of a guru”). The head of school is called the gurumā. Presently, Nanditā Śāstrī is the gurumā and is assisted by Prīti Vimarśinī. The school is located in a beautiful green campus in Varanasi. 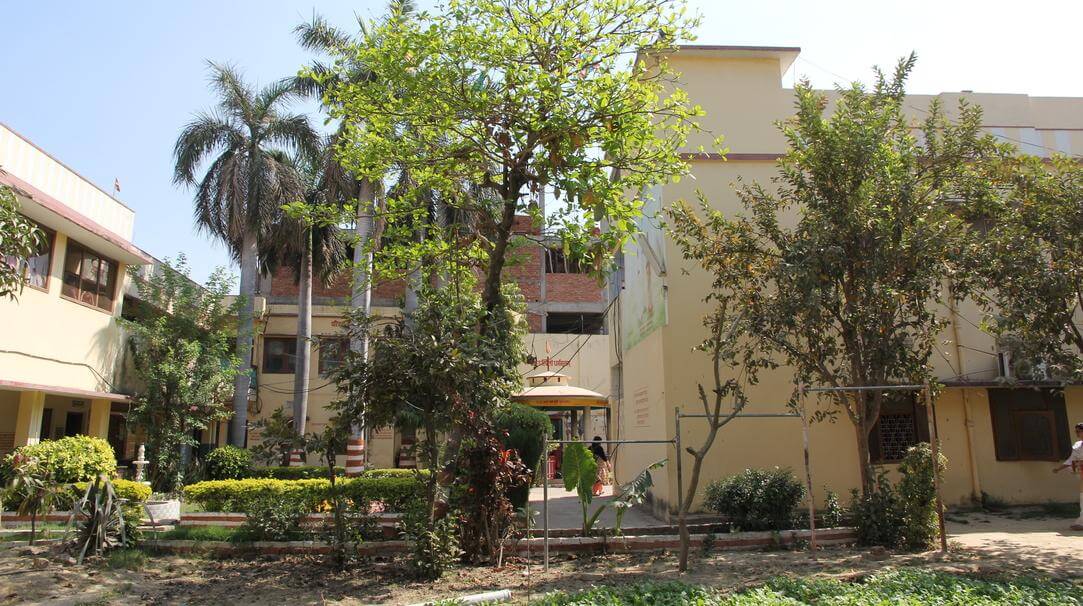 Along with teaching rooms and student housing on campus, there is a Maharṣi Pāṇini Mandiram, a cowshed (gośālā), and the yajñaśālā. The yajñaśālā is the venue for rituals performed on campus. 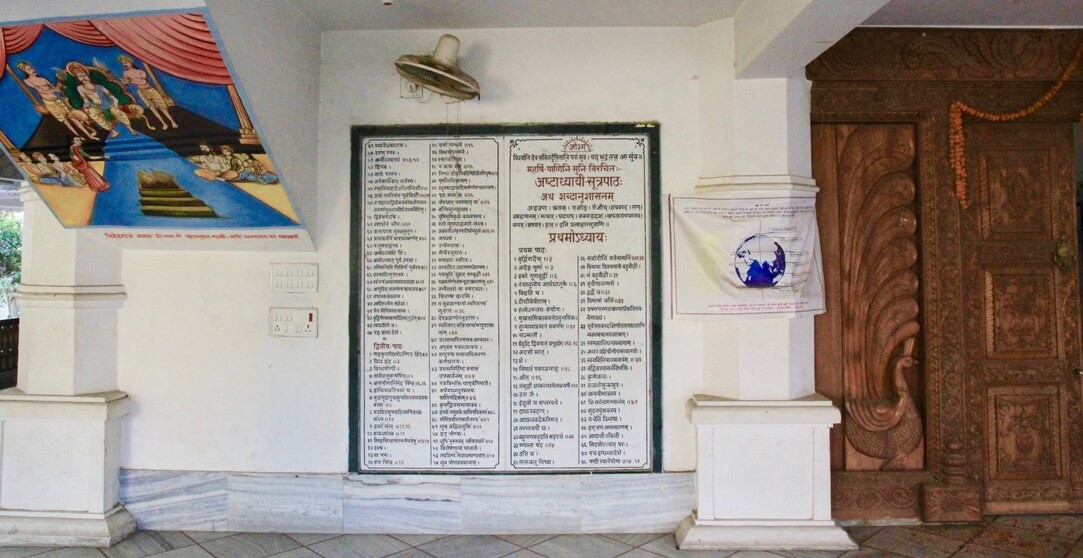 The beginning of Pāṇini’s “Aṣṭādhyāyī” carved on marble sheets in the Maharṣi Pāṇini Mandiram. 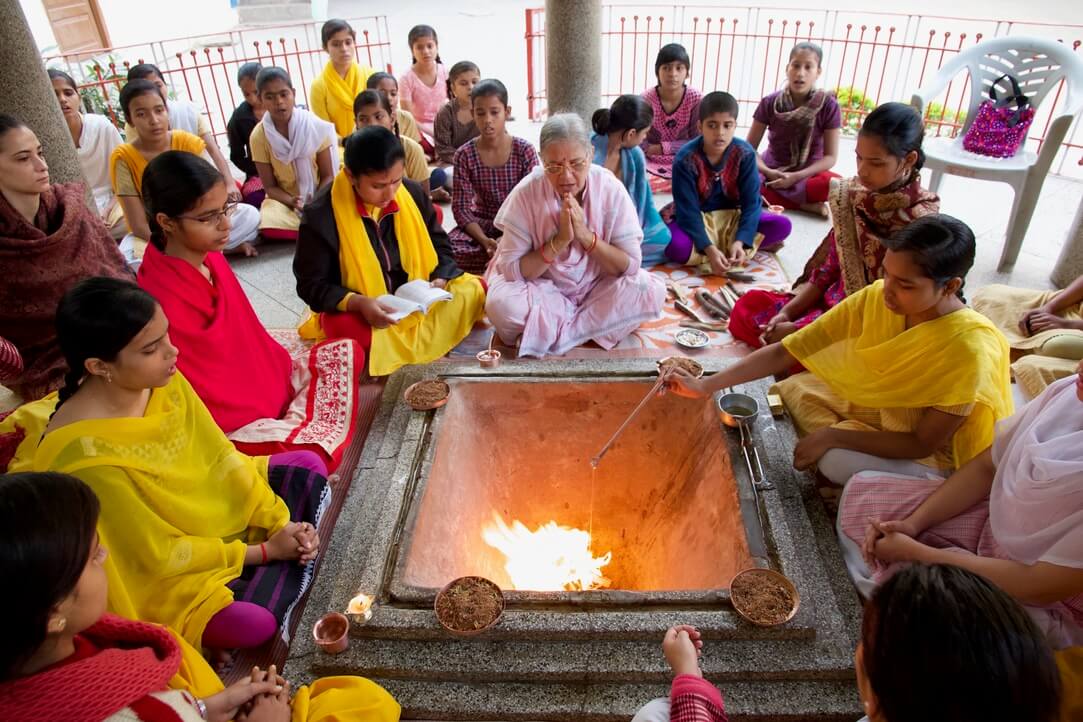 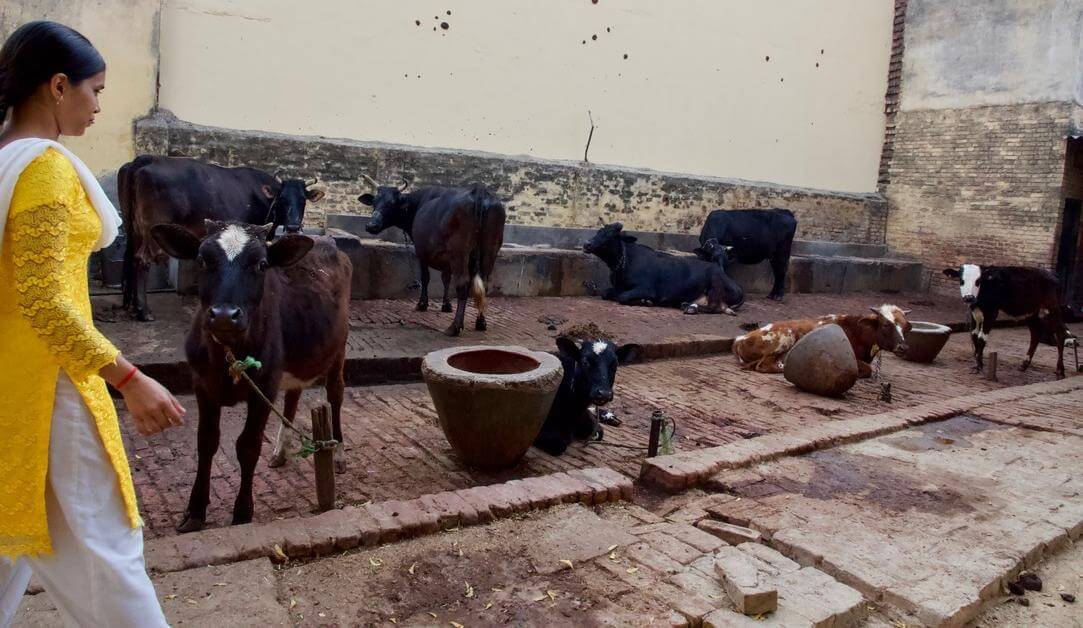 Currently there are approximately 100 girls from across India in the school, with the youngest being nine years old. A full course of study takes 14 years, including the śāstri (Bachelor degree) and the ācārya (Masters degree). The syllabus primarily focuses on Sanskrit grammar (vyākaraṇa), the recitation of the Vedas, and Vedic rituals (homa and saṃskāras).

In addition to their intensive studies, the students of the Pāṇini Kanyā Mahāvidyālaya digitize Sanskrit texts, publish a monthly magazine in Hindi / Sanskrit “Mahārṣi Pāṇini-Prabhā”, and organize seminars. The older students are invited to conduct domestic rituals, and this includes wedding ceremonies. The students also constantly participate in cultural and religious social events in Varanasi.

Despite the daily performance of the Agnihotra at both Assi Ghat and school campus locations, it appears that the students’ knowledge of the Vedas is limited to the mantras that are used during the Agnihotra, along with some saṃskāras. This is a general trend, because even the knowledge of professional priests—who have received special training—are limited by performing certain rites with accompanying mantras.

The girls recite the Gāyatrī-mantra in its 8 modifications. This is called vikṛti which is used as mnemonic techniques to memorize and preserve the Vedas. The recitation of these modifications appears to be taught for presentation purposes. This practice is occasionally seen during the Vedic recitations at the daily Assi Ghat ritual when they perform demonstrations of the Gāyatrī-mantra’s vikṛtis.

It is important to note that, according to a traditional point of view, the morning ritual of worship the Ganges river at Assi Ghat—starting with its name, Subah-e-Banaras—is a quite unusual practice. Consequently, it is very interesting for researchers, as well as those who interested in Indian culture, to observe.